The Tarot: The Return Journey

“We got up that it was not yet dawn,

Inside an artificial satellite,

That led us quickly,

At the gates of Sirius,

where an experimental crew

prepared for the long journey…” 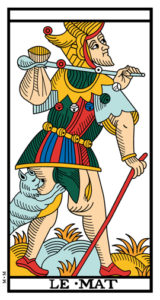 Many years ago, as I approached this millennial teaching again, I grasped some of its traits and, at the same time, others surprised me. I was certain that I was standing before a hidden treasure, a Terma, as the Tibetans remind us but, at the same time, I wondered why they had become so involuted, to the point of becoming a tool basically classified and practiced as a modern fast food oracle. Attempting to answer such a question would take me far from the present purpose; suffice it to say, however, that I have come to understand that the reasons for the ruthless degeneration lie in more than obscure motives that, nevertheless, for and for the Light, share a simple role of necessity. Be that as it may, ever since then, with commitment and perseverance, I have invested much of my energy in investigating these icons in order to restore what I hope may be, not only for them, of contribution: lost dignity. The reward, which I also attempt to share here, has gone beyond all expectation because, step by step, the pursuit of metaphysical téchne has taught me that learning is essential, to operate, as much as letting go, and not just technique, is indispensable, to Being.

The whole of this vivid multicolored play, for this is divine child-adult entertainment, consists of seventy-eight tiles, a transcendental mosaic whose recomposition reveals the spectrum of every degree of human consciousness. This unitary group is characterized by two dimensions, known for centuries as the Major Arcana and Minor Arcana, the dualism concealing the Oneness, the earthly reflecting the heavenly, the personality and the Soul dialoguing in search of Union. 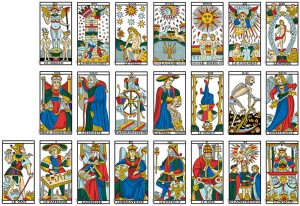 Codes and Laws, as a whole a Cipher Structure, are regulatory factors that allow one to penetrate principle, operation, meaning, as well as the correct method of employing the millennia-old icons. Access to this knowledge is, therefore, made possible only by understanding the coding system that protects and conveys its meaning, wisdom and dialogue. Because yes, dialogue is what it is all about: the Tarot communicates for all intents and purposes, it speaks directly to you and does so, inevitably, to the heart. If you open the door, or if you simply knock, you rediscover a millennial language of connection between conscious and unconscious, between visible and invisible, between your earthly identity and our heavenly essence. Codes and Laws not only govern their matrix and function, but turn out to be the same, specific rules that describe your own, of mechanisms, those of extraordinary, ordinary travelers. Every language can be learned because of the scaffolding of a grammar and vocabulary; likewise, when you enter this symbolic scenario, to prevent you from getting lost in a thicket only, in truth, seemingly unknown and intricate, you find yourself supported by these norms that guide you by understanding and direction. Such rigor, with a digital flavor, has an intrinsic necessity: it solicits the left hemisphere, the father of logic, of analysis, the power of the masculine that, like the key in a lock, interpenetrates into the right maternal orb to fertilize and activate it, allowing you to cross the threshold of a universe of intuition, synchronicity and vision. Life gradually changes in appearance and purpose, while always remaining true to the image of the authentic Self. 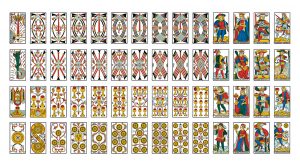 Here, translated into timid summary, is the reason why such “cards” are not what most imagined. Certainly, they are not a mere game designed for the amusement of a Renaissance duke, as modern historiographical theories declare. Even analysis conducted from a psychological perspective, an investigation developed since the second half of the last century, largely limits its authentic scope. While it is true that we are dealing with archetypes, that is, universal and ancestral patterns that describe the dynamics that are expressed within you, it is equally true that this definition does not exhaust all the potential that goes far beyond the psychological spheres. From this angle, in fact, it is not possible to grasp that the ensemble of icons expresses an authentic metaphysical Intelligence that allows you to experience a wisdom that instructs you as much on material and everyday matters as on existential and spiritual issues, without forgetting, however, that this allowing yourself to be led does not spring from an external authority but is a direct expression of the voice of the Soul, your truest nature, the only true source of wisdom. The Tarot, of course, is not, and at this point telling seems superfluous, the simple divinatory tool of the fortune teller. Even if one wishes, legitimately, to use them in this area, to avoid the fanciful or projective use often dispensed, it is always imperative to know their Codes and Laws. The latter ensure usable use by anyone and transform the familiar “tarot reading” into the translation of clear, unbiased, and objective messages that do not descend from the arbitrariness of the practitioner. These messages are manifested through actual linguistic propositions that the operator, literally and not metaphorically, reads and transmits to the interlocutor, thus becoming a direct translator of what is expressed. In fact, precisely because the Coded Structure flows from logical, identifiable and repeatable processes, it is possible to employ Tarot symbolism in an exact and objective manner, without the need for extra-ordinary faculties. The images, thus, instead of being curved to seduce in classical future reading, are transformed into a channel that allows the manifestation of the purest consciousness becoming a conduit, as mentioned, for dialogue with the Soul. 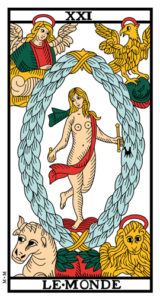 In essence, then, this allegorical iconographic alphabet, like a metaphysical compass of existential orientation, offers you the chance to transmute yourself into a modern shaman, prepared to navigate your sacred inner beyond. In this way you can contact the specific aspects of each of your fears, recognize the reiterated and obsessive patterns that program your reactions, challenge your demons, all of which are fully expressed and described by each of the seventy-eight icons that make up this great, sacred, Family. The Tarot, like a messenger between two realms, a bridge between what you know and what you have forgotten, or what you have buried beneath the threshold of conscious memory, proves to be an elixir of rebirth, a healing balm, reminding and reconnecting you to the authentic essence of who you really are. Through this coded, symbolic, totemic language, instead of trying to find personal reasons for your psychoses in youth or a past life, you understand them for what they really are: universal patterns of primitive, ancestral fears that affect you, as an individual, and all humanity as a whole.

That is why You, like every human being and our race as a whole, embody and manifest precise primary archetypes, which are actually the true activators, etiologically responsible but ineluctably healing, of all your shadows. Added to these are the archetypes of your daily history, individual and personal as much as collective and planetary, which, as humans and as a species, you learn to deal with when You, the Fool, follow your destiny in the world. But what, after all, is this World…?

Conversation by Marina Borruso and Carlo Bozzelli, taken from the project “The Masters in the One” I thank Marina for…
Read more

The Hanged Man and the Mind

An insight into Arcane XII, The Hanged Man: how the mind traps us and causes us to repeat the same…
Read more

Do I have the courage?

Copyright © 2022 – Reproduction in whole or in part of the contents of www.tarocchi.com is prohibited.

The Method taught by the Academy is covered by a UIBM Patent.

The aim of the Academy is to transmit the authentic method of reading the Tarot, whose decoding keys had been lost over the centuries.

Conversation with Marina Borruso
The Tarot: The Return Journey
The Hanged Man and the Mind

Buy courses and items for sale on the Shop using your PayPal acount or your credit card.